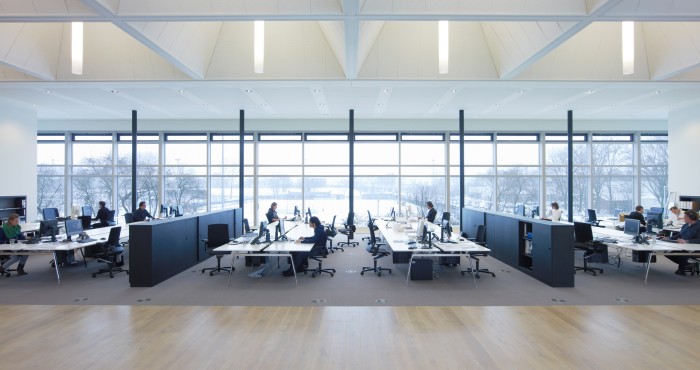 Human Centric Lighting. It is not the first time we addressed this topic, nor shall it be the last.

We came across an interesting article in LEDs Magazine not too long ago regarding ‘lighting’s effect on the workplace and individual performance’ and wanted to share it with you. Please read on.

“.. Too much blue at night can undermine sleep because blue frequencies suppress the sleep-inducing hormone melatonin.

Those same blue frequencies, however, play a stimulating role during the daytime – when we tend to need it – because they excite a pigment called melanopsin that resides in the eye’s non-visual photoreceptors and send signals to the brain where they stir up the body’s master clock, as discovered in the early 1990s by Oxford University neuroscientist Russell Foster and others.

That clock controls a number of physiological clocks including the circadian one. The non-visual photoreceptors are called the intrinsically photosensitive retinal ganglion cells or ipRGCs; the master clock is called the suprachiasmatic nucleus, or SCN.

This new knowledge comes along at a perfect technological juncture, as the modern emergence of LED lighting with its solid-state, digital nature opens the possibility of tuning light wavelengths and intensity to facilitate human performance – to induce alertness and restfulness when we need it, and even to correct the health hazards inherent in the blueish LED-lit gadgets, lamps, and streetlights that critics say can wreck our sleep and cause other bodily harm.

The potential to put LED lighting to use in such a manner is far greater than any other artificial light source has allowed.”

The suggestion is that LEDs we have today give us the ability to manipulate functions in the body to artificially boost the human performance and even reduce the negative effects that are given off by the artificial lighting we still have in circulation today. Paradoxically, the same article tells us to limit the impact of the supposed potential these LEDs have. They are quoted saying:

“…For all the potential good that circadian and other forms of human-centric lighting could provide, many experts caution that it will be nearly impossible to prove that circadian lighting can improve workplace productivity per se…”

Because of the inability to measure particular outputs in productivity in response to changes in colour output in LEDs, it is questioned as to whether we will ever truly determine whether Circadian Rhythms is a verified, scalable model for boosting performance. Beyond testimonials, it will be a hard fact to prove on paper which is likely to keep organisations from rapidly adopting the systems for now.