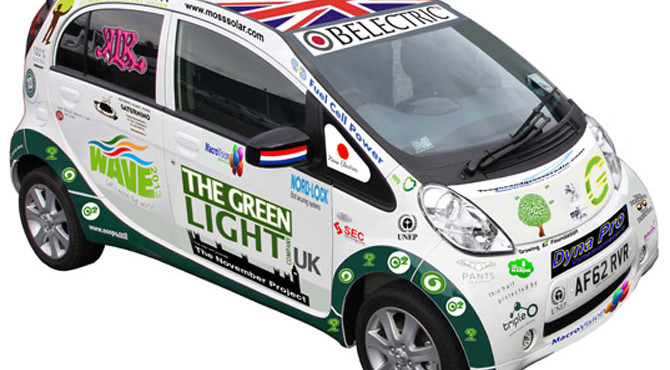 THE GREEN LIGHT COMPANY are proud sponsors of

We are sponsors of Gordon Foat’s expedition across the Alps

The Green Light Company have joined other supporters of energy issues as they sponsor Gordon Foat as he represents the UK in World Advance Vehicle Expedition (WAVE 2013), an event held annually and aimed at promoting the benefits of renewable energies and electric mobility.

Green MotorSport and the Growing Air Foundation are ‘wielding a double edged sword’ against climate change by taking to some of the most challenging terrain in Europe.  Driving a car powered by renewable energy Gordon Foat (Green MotorSport Ltd and main driver) and Leora Rosner (Growing Air Foundation and Co Pilot/Lead Navigator) will join other electric cars to cross the Alps from East to West leaving from Eichgraben, near Vienna, in the morning of June 28 and lead across Vienna, Hungary, southern Austria, Slovenia, the Grossglockner pass, Innsbruck, the Swiss Engadin valley, Arosa and St.Gallen to Zürich. It’s a 1800 km tour in 10 days, with different competitions along the way set to challenge the vehicles.

Along the way, participating vehicles will visit governments, business leaders and schools in cities that they travel through to promote use of renewable energy.  Associated events will include press announcements, radio and TV interviews, video displays and competitions.

On July 5th, after completion of the journey, owners of electric cars will be invited to participate in an electric car parade.  Taking place in Zurich, Switzerland and under the supervision of the Guinness Book of Records, it is hoped that the parade will be the largest of its kind, ever!  After the parade, the cars will be joined by E-bikes in a two day tour around Zurich where they will visit companies who have achieved the European Energy Award.